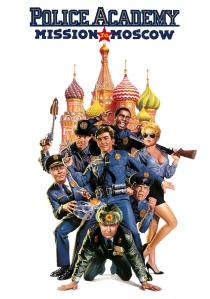 In this leaden, lifeless, lacklustre final Police Academy movie – with only two remaining members of the class of ’84 – the team travel to Russia for, Jesus, some lame reason, I don’t know, I don’t care any more. It’s such a dreadful film, not even managing to be kitsch fun. Christopher Lee plays a Russian general – that’s how awful it is. And it has the most irritating ADR dialogue imaginable. Every “Hmm!” and “Ah!” dubbed over a reaction shot makes your skin crawl with its ineptitude. Here’s the final rundown of running gags and clichés…

Hightower uses his strength! – He’s not in it. Lucky guy

Tackleberry shoots! – When someone trips him up, he does an elaborate gymnastic spin in the air; when demonstrating an arrest on Harris, he takes it too far. He pulls his gun on some people in a sauna, and wants to open a safe by shooting it.

Jonesey’s sound effects! – Squeeky chalk on a blackboard; engine noises as he messes about on a BMX; a blender; a safe opening; Oriental music as he meditates; noisy footsteps; and echoes when someone gives a speech.

Hooks shouts ‘Dirtbag!’ – She’s not in it. Lucky girl.

Callahan’s chest! – While singing undercover in a nightclub, she falls off he piano and ends up sitting on the pianist, crotch in face. When kidnapped by the bad guy (Ron Pearlman), she dresses in lingerie.

Harris shouts ‘Proctor!’ – Proctor’s vanished. Harris says, “Move it! Move it! Move it!” four times. He gets covered in garbage; blows himself up; and goes out on stage (in a ballerina costume) at the Bolshoi.

Lassard is a bit, um, vague! – He pushes a recruit over a barrier; still has fish on his desk; doesn’t notice Harris’s obvious bugging device; and gets in the wrong car at the airport – so spends most of the film with a Russian family.

Homophobic!/Racist! – The whole thing is pathetically xenophobic. During the nonsensical credit sequence, a stuntman appears to be blacked up to play Jones.

Bare breasts! – There are some topless women in a sauna scene – the series’s first female nudity since film two.

The penultimate entry in the franchise – hollow but harmless fun – sees the team tackle a crime spree. Here are more of the series’s running gags and clichés…

Hightower uses his strength! – He pulls a leg off Harris’s chair so it’ll collapse when he sits down; hits a table flipping a live grenade out of a window; bashes a computer when it won’t give the team access to a file; easily pulls up a manhole cover; gets covered in falling masonry and metal and survives; and has a titanic brawl and similarly huge bad guy.

Tackleberry shoots! – He sleeps with a handgun in his pillow; shoots at his father-in-law when he mistakes him for an intruder; threatens a man with a grenade; gets suited up in camouflage gear; has a game of who-can-shoot-best? with the villain; and drives a monster truck.

Hooks shouts ‘Dirtbag!’ – When a pompous man rips up a parking ticket and calls her “girl”, she serves him loads more, impounds his car and shouts “Boy!” into his face. To get some rappers’ attention, she throws out some rhymes of her own.

Harris shouts ‘Proctor!’ – He and Proctor don’t notice the robbery they’re staking out taking place behind them. He breaks the mayor’s beloved model ship. He and Proctor pretend to be window cleaners, high up on a skyscraper and Harris almost falls off the gantry. He gets superglued to a chair. When he and Proctor commandeer a bus to chase some bad guys, Proctor keeps making the stops. He says, “Move it! Move it! Move it!” just twice.

Lassard is a bit, um, vague! – He, seemingly on purpose, out-hustles some pool players. He falls asleep (standing up) during the big denouement scene.

Obvious replacement characters! – Nick’s now just part of the gang, and accident-prone Fackler (who was in the first couple of movies) has been brought back to beef up the numbers.

Homophobic!/Racist! – Hightower uncomfortably says, “As you were, Sergeant!” when Nick hugs him.

In this one – the funniest and most likable of the sequels, which actually has a plot that plays out over 90 minutes – the gang travel to Florida for a police conference. Here are more of the series’s running gags and clichés…

Mahoney flirts and pulls pranks! – Steve Guttenberg has jumped ship and de facto leader Mahoney is no longer in the series. He’s not even mentioned.

Hightower uses his strength! – He kicks a chair across a stage so an about-to-sit-down Lassard doesn’t fall on his arse; rips open an aeroplane door; throws a Frisbee so hard it knocks Proctor off his feet; lifts a man up one-handed; holds a bad guy off a balcony; and wrestles with a crocodile.

Tackleberry shoots! – He considers shooting Harris when he first sees him; scares a passenger on a plane by demonstrating his night stick; points a gun at a shark (“Leave the swimming area now, mister!”); goes so crazy in a shooting range, Callahan has to talk him down like he’s a naughty boy; plays his a handgun in frustration; bursts through a window on a rope; and slides a motorbike into some bad guys.

Jonesey’s sound effects! – A gun cocking, firing, being blown on and put away as Tackleberry mimes shooting Harris; an automated answerphone message and hold music; an airport sensor to annoy Harris; sounds of shaving and playing the violin to amuse a child; motor noises while playing volleyball; parrot squawks; YET MORE kung-fu movie dialogue; a lift’s beep; a radio DJ; a sci-fi noise; and horse neighs (a reference to the first film).

Hooks shouts ‘Dirtbag!’ – She meekly tries to ask a rude man to put out his cigar – when he won’t, she covers him with foam from an extinguisher. She shouts down a loud-hailer into Harris’s face. She goes ape during a crowd-control exercise; and screams “Out of the way, dirtbag!” at a bad guy.

Callahan’s chest! – A couple of boys perv at her cleavage on the plane (“Eyes left!” she commands). One of the baddies refers to her “nice set of papayas”.

Harris shouts ‘Proctor!’ – Harris’s catchphrase (“Move it! Move it! Move it!”) occurs just twice – though Tackleberry also says it at one point. He has ‘dork’ sunburnt into his chest; has his hat set on fire by Proctor; gets injected with sedatives by mistake; and ends up stuck in a massive bass drum.

Lassard is a bit, um, vague! – He stares at his fishbowl when told he has to retire; accidentally throws a letter-opener into a picture of Harris; accidentally knocks a shelf, which sets off a chain reaction of chaos; drops golf balls out of his bag at the airport; knocks the bad guy (Odo from Deep Space Nine) down an escalator; refers to his “best friends” and absent-mindedly points at Callahan’s chest; and assumes being kidnapped is part of a police-procedure exercise, so makes lots of good suggestions to the kidnappers. Most importantly, as my mate Carena will tell you, he carries around a FISH… IN A BOWL… IN A BAG… ON A PLANE.

Obvious replacement characters! – Mahoney’s wisecracking/prank-pulling place on the team has been taken by Lassard’s nephew Nick.

Homophobic!/Racist! – A janitor called Bob rumbles what he thinks is his boss (actually Harris putting on a voice) getting jiggy with a woman in his office. Then Proctor calls out, “Thanks, Bob!” and he assumes gayness. A bad guy says, “Excuse me, Gunga Din,” to a hotel worker in a colonial uniform.

Bare breasts! – A cadet falls over in front of Lassard while collecting her graduation scroll and her face ends up in his crotch. The arse cheeks of Proctor’s wetsuit get worn away after he goes waterskiing without skis. We’re in Miami so there are lots of bikinis; we’re in a PG, so no one takes theirs off.