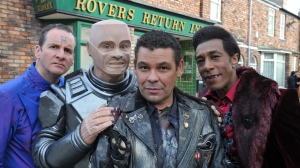 Written and directed by Doug Naylor. Broadcast on Dave.

Regulars: Fictionally, nine years have passed since the last episode. Lister, the Cat and Kryten are as before, but Rimmer’s back to being a hard-light hologram – it’s not specified if this is the man created in series eight or the old Rimmer returned to the fold. Not that it matters hugely. The resurrected crew of Red Dwarf have vanished, again with no explanation, as has Holly. Kochanski, meanwhile, has been killed off between series. (Or has she? See below.)

Episode 1 (10 April 2009): The crew find a sea monster in their water-storage tank… An enjoyable opener, with a return to comedy based on the interaction of the four core regulars. Good fun.
Observations: The cliffhanger from the end of series eight is totally ignored. Sophie Winkleman (yes please) plays Katerina Bartikovsky, a stern, no-fuss hologram activated when Rimmer fails to do his job properly. This is the first episode of Red Dwarf to be directed solely by co-creator/writer Doug Naylor.
Best gag: An oblivious Rimmer listening to music while the others are being attacked by the sea monster.

Episode 2 (11 April 2009): The characters use a tentacle from the sea monster to travel into another dimension… Here’s where things get complicated. The dimension the team travel to is, well, ours. Lister, Rimmer, the Cat and Kryten end up in Britain, 2009 – where of course Red Dwarf is a TV show. (My head hurts.) However, it’s not *exactly* the reality we live in, because Red Dwarf is not a niche sitcom that Joe Public has kind of forgotten about. If Back to Earth has a major failing it’s the deluded belief that a branch of Currys would be showing Red Dwarf on its TV; that the sales assistant and a customer would have detailed knowledge of the show’s gags; that the local sci-fi shop would be decked out almost entirely with Red Dwarf merchandise; that two young children on a bus would know the show intimately… Talk about wishful thinking. But never mind: there’s plenty of fun to be had. When Kryten finds Red Dwarf DVDs in a shop – the actual, proper BBC releases of earlier series – he realises that the gang are fictional characters. Lister then goes one further and finds a Back to Earth DVD – ie, the DVD I used for this review. He reads the back-cover blurb… Yup: it’s the same text used on my copy. (My head hurts.)
Observations: We learn that these episodes are actually set after the then-hypothetical series 10. (My head hurts.) The unseen ‘series nine’ is said to have been the best ever. There was an episode where Kryten told Lister that Kochanski had been sucked out of an air lock. There’s a three-second shot of the regulars waiting for a train at Canary Wharf tube station. What an effort to go to. Jeremy Swift plays the manager of a sci-fi shop called They Walk Among Us! In this episode, references to 1982 sci-fi masterpiece Blade Runner start to mount up. As do mentions of old Red Dwarf episodes (Polymorph, Parallel Universe, Meltdown, Timeslides…). Rimmer and Lister read an issue of SFX magazine with Red Dwarf on the cover – an actual issue done specifically by the SFX editorial team. (My head hurts.) The episode ends with the team driving onto the set of Coronation Street. (Did I mention that my head hurts?)
Best gag: Katerina says that killing a hologram doesn’t count as murder, so Rimmer gleefully pushes her into the path of a car.

Episode 3 (12 April 2009): Having gone to the set of Coronation Street and found Craig Charles, the actor who plays Lister in Red Dwarf, the team ask him to tell them where to find their creator… Perhaps the most insane episode of Red Dwarf yet, this goes past bonkers, doesn’t stop at out-of-its-fucking-tree and ends up all the way back round at kinda working. The Coronation Street section doesn’t make a huge amount of sense – the studio sets are in the relevant exterior buildings, no one’s around aside from three actors, and no one’s that perturbed by *fictional characters* showing up, one of whom looks like Craig Charles – but it’s good fun. The episode then makes a turn and becomes a Blade Runner pastiche. It’s *really* well done, with good matches for sets, costumes, dialogue and plot moves. The mini chase sequence is especially impressive.
Observations: Craig Charles plays himself as well as Lister. His then Corrie co-stars Michelle Keegan and Simon Gregson have cameos. Richard O’Callaghan plays the ‘creator of Red Dwarf’ (a spoof of Tyrell in Blade Runner). (How many people feared that it would be Doug Naylor playing himself?) At the end of the story, it’s revealed that the last two and a half episodes have not been real. The story’s MacGuffin – a hallucination-causing sea monster – is related to the despair squid from series five’s Back to Reality. (Oh! Hang on! Back to Reality… Back to Earth… The clue’s sitting right there in the title.) Chloë Annett makes a surprise appearance late on, playing a Rachel-from-Blade-Runner-like Kochanski in the fantasy sequence. It’s also revealed that Kryten invented the story of the real Kochanski’s death; she actually just decided to leave.
Best gag: Lister types out dialogue that the others have to say – typos, comments on the fiction, and all.

Alternative versions: There’s a ‘Director’s Cut’ available on the DVD, which bolts the three episodes together as an omnibus and adds at least one deleted scene back in. It’s actually the disc’s default version.

Review: The first Red Dwarf to be commissioned by and shown on TV channel Dave falls into the ‘good enough’ category. It’s not setting the world alight, but it has charm and is very watchable. Time has moved on, pressure has eased, and it’s not as try-hard as the late-90s series. As discussed above, the comedy gets very post-modern and self-referential but there’s plenty of good stuff – including, for the first time in what seems like ages, some genuine emotion in the Kochanski subplot. Clearly made on a budget, the production values are neat and trim rather than cheap. It was shot with digital cameras, which give it a certain sheen, and some decent CG set extensions make Red Dwarf itself look impressively epic. (Having said that, a couple of studio sets in the department-store sequence are pretty appalling.) We’re also back to single-camera shooting, but unlike in series seven there’s no studio audience or canned laughter, so it works much better.

Seven massive tentacles out of 10