Skip to content
HomePlanet of the Apes (2001, Tim Burton) 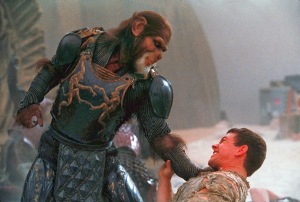 Where, when and what: This movie could be viewed as a second adaptation of the 1963 novel La Planète des Singe, a remake of the 1968 movie Planet of the Apes, or simply a waste of everyone’s time. The story starts aboard a United States Air Force space station called Oberon in the optimistically chosen year of 2029. But the bulk of the action is set on an alien planet in the far future. The end of the film then brings a surprise twist, though not the same one as in the 1968 film. The action moves to the Earth of 2029, but history has been changed. Apes now rule this world too. It’s never explained how. Or why. It’s a silly sequel-baiting coda that was never followed up.

Humans: Our lead character is Leo Davidson (Mark Wahlberg, who dropped out of Ocean’s Eleven to star in this sludge). He works with primates being trained for space missions. After one of them is sent out in a small pod and falls through a wormhole, Davidson follows and ends up on a planet where intelligent apes are in charge and humans are kept as slaves. It’s not all bad news, though: he soon meets a cute woman called Daena (Estella Warren; what she lacks in acting talent she makes up for in standing around looking confused in an adorable kind of way). Kris Kristofferson plays her dad and there are a few other featured people. In a change from the 1968 film, the humans of this world can talk – which makes the apes’ control of them seem even more cruel. We learn that the humans used to be the dominant species, and once Davidson tracks down his space ship he infers the planet’s backstory. The ship crashed here centuries before Leo did (somehow…) and populated the planet with intelligent apes.

Apes: The ape masks are well designed and more articulate than in the original movies. Also, more thought has gone into giving the characters non-human postures and movements. But little of that work was worth it… Ari (Helena Bonham Carter) is the most interesting of the apes. She’s sensitive, smart and opposes the harsh treatment of humans. She buys Davidson and Daena for her father, Senator Sandar (David Warner), then helps them escape. Meanwhile, General Thade (Tim Roth) is a warmongering chimpanzee; he also has a thing for Ari, but she’s not interested. In one scene, Thade’s father is played by – get ready to prevent your sides from splitting – Charlton Heston. He even has a jokey reference to the original movie: “Damn them all to hell!” he says before dying. Also worth mentioning is Limbo (Paul Giamatti), who’s a slaver and the comic relief – two things that don’t often go together.

Review: This film was a turning point for director Tim Burton. He was coming off a decade-plus run of wonderful movies – but this has none of the wit, style or creepiness of Beetlejuice, Batman, Edward Scissorhands, Ed Wood or Sleepy Hollow. It feels like a studio film where creative decisions have been so flattened out by committee that nothing of any distinction remains. There’s cheesy dialogue, paper-thin characters, painfully weak comedy, a score that drones on, and a general absence of wonder. Wahlberg is a dreadful leading man, lacking charisma, while many exterior scenes are shot indoors and feel drab and lifeless. Rubbish.