One of the most interesting things about the Marvel Cinematic Universe series has been its choice of directors. Jon Favreau, Kenneth Branagh, Joe Johnston, king of the geeks Joss Whedon – these are people with form, hired to make flashy, popcorn-cinema superhero movies. There’s maybe been a change of emphasis in recent years, with Marvel now preferring directors who have either less clout or more experience of working in producer-led television. (A cynical blogger might assume the switch came after visionary director Edgar Wright quit 2015’s Ant-Man at the 11th hour due to  creative differences.)

But for Iron Man 3, the series put all its chips on Shane Black, a writer/director with both a real authorial voice and a proven record of success. Since bursting onto the Hollywood scene as the writer of Lethal Weapon (1987), his career has been notable for both his smart scripts and huge salaries: $1.75 million for The Last Boy Scout (1991), $1 million for rewriting Last Action Hero (1993), $4 million for The Long Kiss Goodnight (1994). He then started directing his own scripts with 2005 caper movie Kiss Kiss Bang Bang, which starred Iron Man himself, Robert Downey Jr. Black’s style is idiosyncratic, postmodern and full of dark humour. His films are crime stories with vivid characters, deliberately surprising plot developments, sharply comedic dialogue, self-aware voiceovers, and sequences that build up to an archly cool moment…. only for that moment to then be undercut. He also has an obsession with setting stories at Christmas. Well, all those traits appear in Iron Man 3 (which, as well as directing, Black co-wrote with Drew Pearce).

After the events of Avengers Assemble, Tony Stark (Downey Jr) is in a mess. He’s dogged by panic attacks, sleep-deprived, and suffering from flashback nightmares. He’s got PTSD, basically. It’s an instantly interesting place for a movie to position its hero. It gives an extra shading to everything that goes on and, of course, means his journey is all the more textured. Meanwhile, Pepper Potts (Gwyneth Paltrow) is still by Tony’s side and even gets to put on the Iron Man suit in an action scene. She then becomes a damsel-in-distress and you think she’s been killed off. But Shane Black revels in subverting clichés: just as you’re wondering why the character’s been treated so shabbily, Pepper shows up alive, kicks some serious ass in a sports bra, and actually *kills the bad guy*. Go, girl power.

That bad guy is businessman Aldrich Killian (Guy Pearce, good), though it’s a while into the film before we’re certain he’s behind it all. Initially, the big threat seems to be the Mandarin (Ben Kingsley), an Osama bin Laden-type terrorist with an indeterminate accent, a psycho stare and a penchant for broadcasting violent propaganda videos. When one of his attacks puts Tony’s former bodyguard Happy (Jon Favreau, who directed the first two Iron Man films and is now having a ball with his comic-relief sidekick character) in hospital (where he recuperates while watching episodes of Downton Abbey), Tony vows revenge…

As mentioned, when you’re watching a Shane Black film and a cliché is being set up, it’s so the film can then subvert it. This keeps things surprising, refreshing and unpredictable, and lifts his movies above the crowd. Black knows the rules of filmmaking, of movie logic, of genre conventions – and he knows how and when to break them. Iron Man 3 is full of examples of this kind of switcheroo storytelling, from a henchman who immediately surrenders when challenged to the Iron Man suit being destroyed at the worst possible time. The biggest, and best, is the *audacious* plot twist we get at the 72-minute mark. To reveal that the Mandarin is a stooge created by Killian as a decoy and is actually a meek, drug-addled English actor called Trevor Slattery is a bravo moment of the highest order. The gag works so well because we’re used to the theatricality of self-important superhero-movie villains. (And, let’s be honest, because of Ben Kingsley’s reputation as an actor who takes himself too seriously.) It’s pure Shane Black: introducing something you think you’ve seen before and then pulling the rug from underneath you.

If there’s one element of the movie that doesn’t fit that format it’s Rebecca Hall’s character, Maya Hansen, a scientist who gets lost in the mix and feels very functional. The actress has said that the part ended up being very different from what she’d signed on to play, which is a shame as in the finished film she makes very little impression. But overall, this is a superb piece of work. Like all great sequels, it’s more of the same… but different. It’s routinely funny; there’s an engaging story; and the action, such as the free-falling ‘barrel monkey’ sequence, is often spectacular. We also get precisely the right amount of character depth for one of these big superhero tentpoles.

As was the case in Iron Man 2, the middle act here sees Tony at rock bottom. But rather than that earlier film’s maudlin tone, Iron Man 3 has richer and more dynamic storytelling. Some critics and fans have complained about this segment of the movie, saying it’s Iron Man minus Iron Man because it sees Tony with no working suit, no fancy workshop and no huge mansion. But it’s very interesting character development. The world thinks Tony’s been killed, and on a metaphorical level he has been. He’s lost his swagger, he’s lost his support network, and he even refers to the lifeless Iron Man suit as ‘him’, as if detached from his old life. It takes a friendship with a young boy he meets to get him back on track – but again this subplot takes a surprising turn. Tony doesn’t talk down to Harley (Ty Simpkins). He treats him like an equal, which involves being rude and arrogant towards him, and Harley gives as good as he gets. Their friendship is therefore likeable and fun and interesting and entertaining and unpredictable. Just like the film as a whole. The old Tony is back.

Nine beauty-pageant judges out of 10 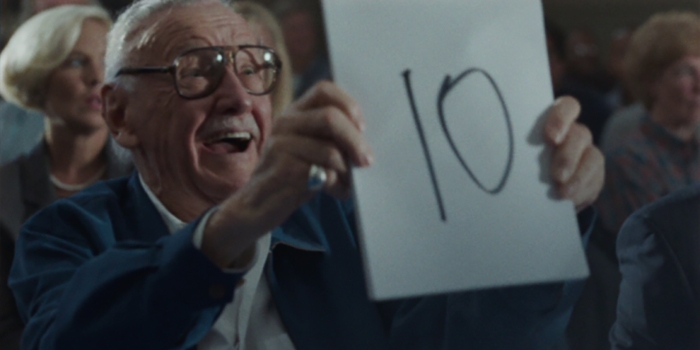