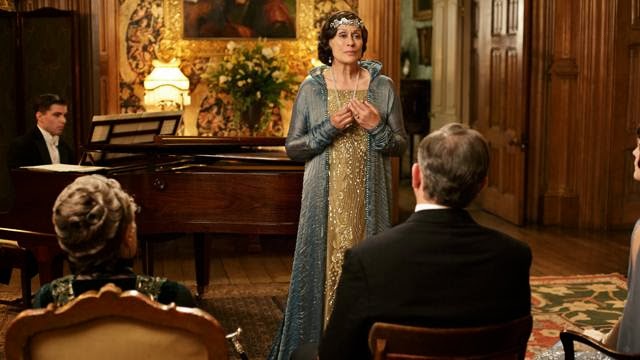 Various guests come to Downton for a house party, including a card sharp, a famous singer, and potential suitors for Rose and Mary. But events take a very dark turn…

Where is it set? The house and its estate. Isobel’s house. The village.

Debuts, deaths and guest stars:
* Mr Green (Nigel Harman) is valet to the visiting Lord Gillingham (so due to the conventions of the time is called Mr Gillingham by the other servants). He flirts with Anna, which rubs Mr Bates up the wrong way, then later rapes her while everyone else is watching a concert.
* Anthony Foyle aka Lord Gillingham (Tom Cullen) comes to visit the house. He knew the Crawley sisters when they were all young. He has an unseen girlfriend, Mabel Lane Fox, but takes a romantic interest in Mary.
* Other guests include the Duchess of Yeovil (Joanna David), Sir John Bullock (Andrew Alexander) and Terence Samson (Patrick Kennedy). Sir John is a potential boyfriend for Lady Rose. Samson is a card sharp who tries to fleece the other men, so Michael Gregson teaches him a lesson.
* Australian singer Dame Nellie Melba (Kiri Te Kanawa) performs at the house. There’s a fuss, though, when snobbish Mr Carson thinks she should eat in her room rather than with the other guests. Robert agrees, but Cora is furious when she finds out. This is a rare instance of Downton Abbey dramatising a real-life figure (see ‘Real history’ below).

Best bits:
* Violet’s being very kind this week. She schools Tom on etiquette, then seeks out an isolated Isobel and insists that she come to the house party.
* The servants discuss card games. “You can’t lose a fortune playing snap,” says Jimmy. “I could,” says Molesley.
* Poor Molesley is seconded as a lowly footman and even has to wear gloves while serving food.
* Carson walks into the kitchen to see chaos. “What’s going on?” he demands. A hassled Daisy says, “Alfred’s making the sauces for the dinner and Mrs Patmore’s having a heart attack!” Carson replies, “I’m not surprised.” (He’s misunderstood: Alfred’s doing the cooking *because* Mrs P is having a heart attack. Well, actually it turns out to be only a panic attack.)
* After Robert is conned by a card sharp, Michael Gregson uses his superior skill at poker to win the money back – and Robert’s respect.

Worst bits:
* Mr Green brutally attacks Anna while everyone else listens to Dame Nellie’s performance. (I place this here in ‘Worst bits’ not because it’s bad storytelling or bad writing or because it shouldn’t have happened. There’s nothing wrong with dramatic things taking place in a drama. But it’s a harrowing thing to see.)
* The Edna/Tom storyline fails to fly. She sneaks into his bedroom late at night but it’s difficult to care.

Real history:
* Dame Nellie Melba (1861-1931) was a famous Australian operatic soprano. By 1922 she’d been singing all over the world for three decades, so Downton Abbey rather underplays her standing. Experts say she would never have been treated as anything less than a star, even by a snobbish butler. She was also 80 years old (Kiri Te Kanawa was 69) and would not have drunk alcohol before a performance, as she does in this episode.
* Robert is a member of White’s, a gentlemen’s club in St James’s. It was founded in 1693, making it the oldest such club in London.
* Rose says she’s a fan of American singer and actor Al Jolson (1886-1950). She’s got all his records including April Showers, a song Jolson debuted in the Broadway show Bombo in October 1921.
* Violet quotes poet Christina Rossetti (1830-1894): “Better by far that you should forget and smile than that you should remember and be sad.” Isobel points out that Rossetti was talking about her own death, not her child’s.

Upstairs, Downton: Mr Carson uses the phrase “north of the park” as a dismissive way of saying an aristo is down on her luck. It was a snobbish idea based on the area of houses north of Hyde Park in London; society people generally lived to the south, in Belgravia. In a 1971 episode of Upstairs, Downstairs, Lady Majorie was aghast at the idea of moving there when the family’s finances had to be tightened.

Maggie Smithism of the week: After she complains about Tom’s dull small talk, Violet is told that not everyone can be Oscar Wilde. “That’s a relief,” she says.

Mary’s men: Mary shares a connection with Tony Gillingham. He’s interested in her; she’s reticent, but they share a dance. Also, despite having a girlfriend, he says he’d like to take Mary out. It don’t take a genius to see where this storyline is going.

Doggie! Isis is spotted sitting in the library. When Robert leaves rather than chit-chat with Michael Gregson, the dog follows.

Review: The conclusion of this episode caused a controversy, with some viewers objecting to a rape occurring on a Sunday night on ITV. This, to me, seems to be missing the point. On a storytelling level it works so well because it’s incongruous. Any rape is shocking, but to have something so savage in the cosy world of Downton Abbey is incredibly effective and affecting drama.