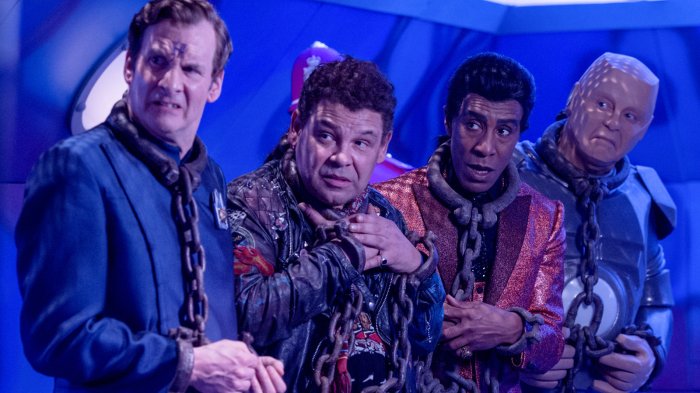 Written and directed by Doug Naylor. Broadcast on Dave.

Regulars: This is the fourth series of Red Dwarf in a row with just the fab four ­– Lister, Rimmer, the Cat and Kryten – though a couple of old regulars make guest appearances.

Episode 1: Cured (12 October 2017): The crew of Red Dwarf stumble across a moonbase where a scientist has resurrected famous evil people but cured them of being evil… A not-bad series opener. The plot doesn’t hang together, but there are some good laughs along the way. Ryan Gage is very funny as an upbeat and friendly Hitler who has a smiley face on his sleeve rather than a swastika, while the woofer at the end – the Cat bluffing that he’s betraying the others – is set up nicely by an opening scene of the guys playing poker.
Observations: Four people have been recreated via DNA sequencing: sadistic warlord Vlad the Impaler (1431-1477), Soviet despot Joseph Stalin (1878-1953), Roman empress consort Messalina (c17/20-48) and Nazi twat Adolf Hitler (1889-1945). We’re told about a fifth – media baron Rupert Murdoch (born 1931) – but apparently he’s not responding to treatment. Starbug is featured.
Best gag: The Cat says he thought Hitler died playing golf. Rimmer explains that, no, he was in a bunker in Berlin. “He poisoned his partner and shot himself.” “Golf can do that to you.”

Episode 2: Siliconia (19 October 2017): The crew of Red Dwarf are captured by a space freighter populated by revolutionary mechanoids… An episode based on the idea that Kryten puts up with a lot of shit from the others, which doesn’t especially fly. It’s not helped by some cheap-looking robot masks for the revolutionaries. Then Lister, Rimmer and the Cat’s consciousnesses are downloaded into mechanoids, so Craig Charles, Chris Barrie and Danny John-Jules have to also put on Kryten-like masks and body suits. They get funny stuff to say – especially Barrie, who uses his mimicry skills to copy Robert Llewellyn’s voice – but the characters look too different and the performances don’t pop through the latex.
Observations: Kryten has an odd line of dialogue about Lister’s guitar that sounds like an unnoticed fluff or a rewrite that went wrong: “It’s almost to the day that it got flushed into space.” Starbug is seen again. Late on, James Buckley (The Inbetweeners, Rock & Chips) shows up for a tiny role as a working-class mechanoid. His scenes are all on location and shot in a way that suggests he wasn’t there at the same time as the regular cast.
Best gag: Kryten is busy ironing but gets constantly interrupted by messages appearing a screen – first from the Cat, then Rimmer, then Lister. Then we see that the latter is actually in the same room as Kryten. And wants Kryten to fetch a beer from a fridge that’s within Lister’s reach.

Episode 3: Timewave (26 October 2017): The crew are struck by a ‘timewave’, which brings them into contact with a spaceship from 24th-century Earth. On the ship, criticism has been outlawed… It’s a fun episode if not that plausible. The central idea (that people who criticise get high on criticising) might be a pop at internet forums and morons who write over-long, pretentious blog posts about Red Dwarf’s strengths and weaknesses.
Observations: Starbug is featured. The Om Song from series three is mentioned. Amrita Acharia plays a waitress who doesn’t care that she’s shit at her job because no one’s going to criticise her. Johnny Vegas shows up as a dressed-all-in-pink ‘crit cop’. He arrests the crew and puts them in a cell with another offender (Joe Sims) who, when we first see him, wears a mask and straight jacket a la Silence of the Lambs. (His crime? Tutting.) The episode has vague visual echoes of The Happiness Patrol, a 1988 Doctor Who serial.
Best gag: Rimmer likes the no-criticism law: “They’re on to something. Take me: back in the day I misrepaired a drive plate and killed over a thousand people. Now, in our culture, that sort of thing is really frowned upon. But here, you just move on.”

Episode 4: Mechocracy (2 November 2017): Lister accidentally downloads a virus into Red Dwarf’s mainframe, so as a precaution the crew prepare to evacuate. But the self-aware vending machines object to being left behind… A bottle episode, entirely set on Red Dwarf and featuring no guest characters other than voiceover roles. Enjoyable stuff. Successful gags include a decent set-up/punchline about Kryten manipulating Rimmer; a scene where Lister, Rimmer and the Cat have a long, irrelevant conversation while an emergency alarm is going off in the background; and a runner about the Cat needing reading glasses. Halfway through the episode, the storyline takes a left turn as an election for a new Red Dwarf leader is held: Rimmer and Kryten go head to head in scenes that spoof UK and US politics.
Observations: Doug Naylor’s obsession with vending machines, a motif that has recurred throughout this show since day one, gets another airing. Clips from 90s episodes are used in the election adverts, while the events of 80s episodes The End and Kryten are referenced. There’s then yet another, much larger callback to old continuity as Talkie Toaster (still voiced by David Ross) makes his first appearance since 1991. The scene is a bit of an embarrassment: old gags and camera angles are simply trotted out rote in an attempt to please long-term fans.
Best gag: Rimmer wants to demote Lister as a punishment but Lister is already the lowest rank possible, so he promotes him in order to demote him again. However, after his promotion, Lister points out that he’s now Rimmer’s equal and can’t be demoted.

Episode 5: M-Corp (9 November 2017): Lister is blighted by a perception filter that means he’s no longer able to see objects that are not approved by M-Corp, the ship’s conglomerate owners… The comedy about things and people being invisible or inaudible to Lister gets some good laughs, even if the surrounding plotline makes very little sense.
Observations: Lister hits a significant birthday (implied to be 50). Helen George from Call The Midwife guests as M-Corp’s spokesperson who reels off dialogue in a serene voice. The plot’s climax sees Lister’s personality regress to how he was when he was 23 – and the final scene deliberately repeats dialogue and blocking from Red Dwarf’s first ever episode.
Best gag: A medical computer asks Lister if he wants to know his predicted date of death. Before Lister can answer, Rimmer leans forward and mimics Lister’s accent: “Yes please, man!” (The computer says Lister will die at the age of 63.)

Episode 6: Skipper (16 November 2017): An anomaly penetrates the universe, causing a giant lesion in the space-time continuum. As a result, any decision results in the option not taken coming to pass. Then Rimmer uses the lesion to travel to various alternative realities… The storyline is another one of those sci-fi gimmicks that doesn’t really stand up to scrutiny. And the second half becomes something of a fanwank explosion as Rimmer visits different realities and old characters get cameoes.
Observations: The episode features yet more continuity references – Rimmer’s three brothers are mentioned; Norman Lovett makes his first appearance as Holly since 1999, likewise Mac McDonald as Captain Hollister; the famous ‘Everyone’s dead, Dave’ routine from Red Dwarf’s first episode is liberally paraphrased. Danny John-Jules gets to play Rat in one of the alternate realities: a man-sized rodent who evolved in place of the Cat.
Best gag: Rimmer quantum skips into a new reality and meets a refined, upper-class Lister. “Are you different from my Lister?” asks Rimmer. “A guy who cleans his teeth and pees in the toilet simultaneously even though the basin and the toilet are in different rooms?”

Review: After its decade off, Red Dwarf has now been on TV channel Dave for eight years, four series and 21 episodes. It’s settled into a pattern of wacky, sci-fi exploits, and the show’s initial gimmick – that these characters are stranded in deep space – has been forgotten about. Lister, Rimmer, the Cat and Kryten are now routinely bumping into people from earth. Despite this ‘opening up’ of the format, series 12 suffers from repeating ideas: there are two consecutive episodes about Red Dwarf’s computers causing problems, for example, while two are about the rights of non-organic life forms. The show has also lost some of its bite. Lister and the Cat still ridicule Rimmer; he in turn still shows disdain for them. But it’s all noticeably chummier than the BBC years. The characters have reached middle age and calmed down, and so has the tone. It’s still funny and likeable, but nothing in this series matches Red Dwarf at its best. Perhaps the aging process also accounts for the show’s obsession with its own history – most people get nostalgic as they get older. Sadly, series 12 can’t resist making smug callbacks to old episodes, old characters, old sets, old jokes, old incidental music, old scenes… The bigger references are accompanied by whoops, cheers and applause from the studio audience, which sounds stacked with Red Dwarf die-hards.

Seven nice cups of char out of 10