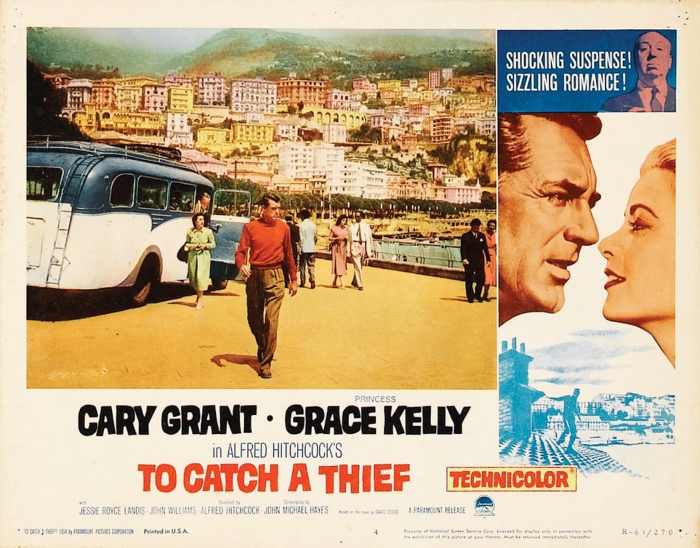 When a former jewel thief is accused of a new spate of robberies in the south of France, he sets out to discover who’s really responsible…

There’s huge star power in this film. In fact, the wattage created by its leading actors outshines everything else to such a degree that when it’s finally revealed who’s been stealing some jewels from well-to-do socialites it’s very difficult to care. Much more interesting is the flirtation, romance, sex appeal and chemistry of Cary Grant and Grace Kelly.

In an early Hitchcockian image, a domestic cat trotting over some rooftops is used a funny metaphor for a cat burglar. Someone is purloining valuables in the beautiful, sunny, stress-free French Riviera and suspicion soon falls on American ex-pat John Robie (Grant). He has form for this kind of thing, but swears blind he put his criminal habit behind him 15 years previously – around the time he became a hero in the French Resistance. (He blithely says that he killed 72 people during the war.) However, with the police breathing down his neck, Robie reckons the best way to prove his innocence is to catch the actual thief…

This was Cary Grant’s third Hitchcock role (of four) and actually came at a point when, at 50, he was considering retiring from acting. Here, as in so many movies, he shows off world-class charisma, effortless panache and wonderful comic timing. He also *moves* so well, with a gentleman’s grace but great, masculine power too. It’s no surprise that, just seven years after this, he was sounded out about playing James Bond in the first 007 film. (Grant had been the best man at Bond producer Cubby Broccoli’s wedding, but the actor’s reluctance to sign up to multiple movies ultimately put him out of the running.)

Robie gets help in his plan from Lloyd’s of London insurance investigator HH Hughson (John Williams, who’d sparkled in Hitchcock’s Dial M for Murder a couple of years earlier). Together, they identify a likely target for the cat burglar – a rich American widow called Jessie Stevens (Jessie Royce Landis, terrific), who’s holidaying in the area with her grown-up daughter, Frances (Grace Kelly). In order to keep an eye on them, Robie engineers an introduction in a hotel casino (another instance of Cary Grant seeming James Bond-ish). To attract the Stevenses’ attentions, he accidentally-on-purpose drops a casino chip down a French woman’s cleavage then embarrasses her into paying him what it was worth. It’s a bizarre moment that must have had Hitchcock giggling like a schoolboy, and it gets Robie talking to the Americans. He charms them and, as a cover story, claims to be a lumber man from Oregon.

Here, at the half-hour mark, as Grace Kelly enters the story, is when the film really comes alive. At first, Frances seems sullen and uninterested in Robie. He doesn’t pay her too much attention either, preferring to cosy up to her jewel-flaunting mother. When Jessie brazenly asks him if he likes her daughter, all he can muster is that she’s ‘quietly attractive’, which might very well be the greatest understatement in 20th-century cinema. But Robie and Frances’s romantic subplot is kicked into the stratosphere when she then surprises him with an exceedingly sensual goodnight kiss. The flirtation is on.

Frances was Kelly’s third and final role for Alfred Hitchcock. Given its impact and success, it was a remarkably short collaboration: all three movies were filmed between July 1953 and September 1954. In each, she’s pure class: stunningly beautiful, of course, and effortlessly sexy; but more importantly every character has a wonderful spirit and charm. Frances Stevens is no exception – she’s smart, funny, adorable and you can’t take your eyes off her. She was also one of Grace Kelly’s final roles for any director. In April 1955, at the Cannes film festival, she met Prince Rainier III of Monaco; they married a year later and she quit Hollywood to become the principality’s princess.

As they grow closer, Robie and Frances look at a villa that he claims he needs to rent (and he can’t resist scoping out its windows and entry points: old habits die hard!). Frances then drives them very fast down mountain roads – a tremendous sequence achieved via rear projection, wind machines and the loud throb of the car engine. All the while, the two actors are having a ball with their flirtatious dialogue. So are we – the whodunit plot has been all but forgotten. There are a couple of suspects, one of whom is a flighty teenage girl played by Brigitte Auber, but Grant and Kelly steal the show.

Frances is convinced that she’s rumbled Robie’s cover and says he just doesn’t seem like a lumber man from Oregon. Over a picnic high above the coast, she tells him he’s out of place: more like “an American in an English movie”, which is surely a multi-level in-joke from Hitchcock and his writers about Cary Grant (who was an English star in Hollywood) and Grace Kelly (who’d played an English woman in Dial M for Murder). The two actors are endlessly watchable in their two-handed scenes, which Hitch allows to play out in natural, uninterrupted long takes.

Their sexually charged banter also contains some shameless innuendo. At their picnic, Frances offers him Robie some chicken and asks, “You want a leg or a breast?” He knowingly replies, “You make the choice.” Later, she says, “I have a feeling that tonight you’re going to see one of the Riviera’s most fascinating sights.” When Robie doesn’t reply, she adds, “I was talking about the fireworks,” and he quips, “I never doubted it.”

But there’s genuine romance to match the badinages. Eventually the pair sleep together – dramatized by a cheeky Hitch cutting away to a nearby fireworks display. When the film later reveals who the jewel thief actually is – after an elaborate sting planned by Robie, Frances, Jessie and Hughson – it’s rather underwhelming. We’ve already had the climax.