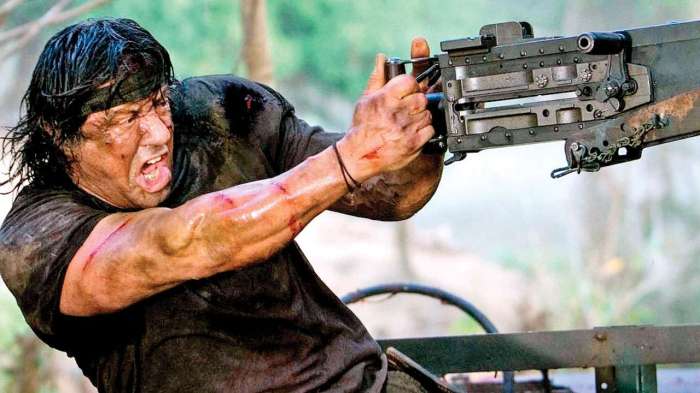 A series of reviews looking at Sylvester Stallone’s two most famous characters, Rocky Balboa and John Rambo, film by film…

Living off the grid in southeast Asia (still), John Rambo is hired to sneak some American relief workers into dangerous territory…

What does Stallone do? Having revisited his other major role in 2006’s Rocky Balboa, Sly next turned to John Rambo, who had been off cinema screens for 20 years. He worked on the script and later stepped in to direct the movie after another director walked away from the project late in the day. (It’s therefore the only Rambo film helmed by its star.) As we rejoin his story, John is living in Thailand and keeping his head down. When the cocky leader of some American missionaries asks for his help in crossing the border into Burma, Rambo says no – it’s far too dangerous, given the civil war going on there. But then the guy’s blonde colleague tries and Rambo says yes. He takes them upriver, and just like the similar journey in Apocalypse Now, the group soon encounter the kind of stock movie locals who are aggressive for no reason and take offense at the slightest thing. John is forced to kill them, much to the Americans’ disgust. Later, a few days after John has dropped them off and returned home, he learns that the missionaries have been captured by the Burmese army – so he agrees to show a bunch of hired mercenaries where he left them. Feeling guilt for their plight, he also insists on joining the rescue mission…

Other main characters:
* Michael Burnett (Paul Schulze) is the nominal leader of the Christian relief workers, who are an intensely underwritten bunch of characters. (Most of them don’t even speak.)
* Sarah Miller (Buffy the Vampire Slayer‘s Julie Benz) is the only female member of the group. She manages to pep-talk Rambo into helping them, but probably regrets her choice when she’s later captured, tortured and who knows what else by a bunch of shits I Burma.
* Officer Major Pa Tee Tint (Maung Maung Khin) is a cigarette-smoking prick in charge of a large group of soldiers in Burma. (And the film only ever calls it Burma, despite the country being known as Myanmar since 1989.) An evil, thoroughly punchable despot, he has no redeeming features.
* The most notable member of the mercenaries – because he shouts the loudest and has a Cockney accent – is Lewis (Graham McTavish). He says fuck a lot and takes against Rambo for no reason whatsoever. He and his colleagues are fairly risible and not worth cataloguing in full. They swap ‘written’ banter and shoot things.

Key scene: Having mounted a sneaky assault on the Burmese camp, John and the mercs rescue some American survivors and they all flee across country on foot – chased by soldiers and dogs. Well cut and benefiting from having no incidental music, the sequence is quite exciting.

Review: First Blood, the film that introduced the character of John Rambo, was about a Vietnam veteran attempting to reacclimatise to life back in America. So why has every Rambo sequel been set overseas? Could it be so nameless foreign locals and soldiers can be butchered for our entertainment, like they’re avatars in a shoot-’em-up video game? The opening of this film sets up the real-life situation in Burma, where the world’s longest-running civil war is being used as an excuse for some barbaric behaviour. The movie, unwisely and crassly, uses actual footage of massacres and dead bodies overlaid with hammy actors pretending to be news anchors. This harshness is then continued into the fiction, which dramatises terrified villagers being sadistically murdered. The cartoon violence of Rambo II and Rambo III, which wasn’t meant to be taken *too* seriously, has been replaced by harrowing depictions of graphic injuries, murder, child murder, rape, dismemberment (so many dismemberments), burnings, torture and corpses. These things go on in genocidal wars, no doubt, but this is meant to be a Hollywood action film. The fact that drama is non-existent means all this violence just comes off as empty and for its own sake. The money spent on the production is the only thing that lifts this film above a straight-to-video Steven Seagal flick.

Three pigs out of 10