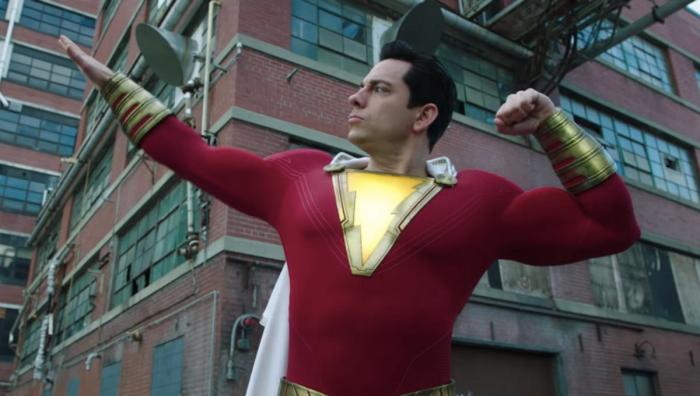 Like a TV interview done over a live satellite link-up, there has sometimes been a delay with the DC series of superhero movies. They’ve often seemed like they’re lagging behind the rival Marvel Cinematic Universe, with DC movies coming off as reactions to MCU successes. For example, 2019’s Shazam! sees the franchise attempt the comedic and youthful tone already seen in Marvel’s Spider-Man films. But there is a key difference. Despite its 12-certificate rating from the BBFC (‘Moderate violence, threat, horror, innuendo, bleeped strong language’), Shazam! is essentially an old-fashioned kids film.

Before the cheeky sense of humour used for most of the runtime, we do actually start with the kind of dark, sombre, taking-itself-seriously mood that dogged some earlier DC movies. In the 1970s, a young boy called Thaddeus Sivana encounters the mysterious, cave-dwelling wizard Shazam (Djimon Hounsou, who played a different role in DC’s Aquaman). Shazam is searching for a worthy successor to take over his role of… protecting goodness or something? Being a champion against evil? Something nebulous like that. Anyway, Thad is swiftly rejected because Shazam realises the lad is tempted by evil and corruption.

Cut to 45 years later, in Philadelphia, and we’re introduced to a much more likeable young boy: 14-year-old foster kid Billy Batson (Asher Angel). We first see him conning a pair of cops so he can hack into their computer and search for his long-estranged birth mother. It’s economic storytelling, quickly demonstrating that he’s both street-smart and troubled. When the authorities catch up with him, he’s then placed with a new foster family: a diverse bunch of kooky kids, each with their own easily sketched personality, and all overseen by a kindly, laid-back couple called Victor and Rosa.

Meanwhile, the superhero element of the plot kicks off when Billy too has a dreamlike encounter with Shazam (does this wizard have an especial fondness for puberty-age boys or something?). Billy is more successful than Thad, though, and before you can say rushed and arbitrary origin story, he has been endowed with special abilities – the most notable of which is that he can switch instantly from an innocent-looking teenager to an muscular adult superhero who wears a cape. The alter ego is played by Zachary Levi from TV comedy Chuck.

The film comes alive as Billy rather haphazardly road-tests his new powers. Initially, the only other person who knows his secret is his new foster brother Freddy (an impressive Jack Dylan Grazer). He’s a disabled wiseass who acts as both Billy’s comedy sidekick and his conscious when Billy gets too big for his new superhero boots. Together they experiment, trying out which abilities the grown-up Billy has – flight, invisibility, shooting lightening bolts out of the fingers, hyper-speed, super-strength… and buying beer underage. The scenes are largely played for laughs and some are scored by Queen’s Don’t Stop Me Now. It’s zippy and playful wish-fulfilment stuff, and the events of previous DC films are used smartly to explain why Billy and Freddy are aware of superhero cliches.

But after a while you do start to wonder what it all means. It’s a bit empty, a bit too flippant. We’ve already had a setup where our lead character is essentially chosen for greatness at random and then the story throws up a spectacularly vague threat. Mark Strong plays the grown-up Thaddeus, who now has an obsession with rediscovering the mysterious Shazam and claiming his power. He’s a blood-and-thunder character with a frown standing in for any emotion, daddy issues instead of any compelling motivation, and the plot is a fairly standard taking-on-the-bullies narrative we’ve seen countless times before.

There is more substance, thankfully, in the subplot about Billy’s search for his mother, which is a storyline that throws in a couple of unorthodox beats and adds a bit of heart. It’s also in the film’s favour that they’ve cast age-appropriate kids, rather than the 20-somethings we’re used to seeing as youngsters in John Hughes movies or the various recent Spider-Man tellings. The central idea of the lead character being played by two actors is a very fine needle to thread; we have to believe in both versions individually and as a pair. Casting actors with an age gap of 22 years certainly helps (imagine if the ‘young’ Billy actually looked about 25?!), but it’s got to be said that you never really buy the idea that they’re playing the same person. The performances are just too different, and Zachary Levi in particular pushes his wide-eyed wonder and goofiness over into irritating.

An obvious comparison here is with the 1988 comedy drama Big, which starred Tom Hanks as the adult version of a boy magically aged by a wizard. (Well, in Big’s case, the wizard is a mechanical, wish-granting vending machine.) Shazam! even contains a sly reference to the earlier film when characters run across oversized piano keys in a department store. But one of the reasons why Big was more successful is that lead character Josh Baskin only switches bodies twice: from 12-year-old to seemingly adult, then much later back again. Shazam!’s repeated flicking between the two actors gets in the way of Billy popping through enough. It never really feels like *his* story. We never fully invest in him.

What Shazam! does feel like, though, is a children’s film with modern superhero trappings. There are big action sequences and lots of CGI and tie-ins with other movies, but at its heart this movie has more in common with, say, Flight of the Navigator or Honey I Shrunk the Kids. The violence is never too harsh; the danger is never too intense; there are reassuringly dependable parent characters. Children embark on fantastical adventures, outsmart some grown-ups, and get the better of some rather tame school bullies. There’s slapstick and silliness alongside moral lessons. Many, many people – including previous blogs on this website – have criticised the DC film series for being po-faced and overly grim and laughably pretentious. Shazam! redresses the balance by going so far the other way that, while having some charm, the film ends up feeling too small. Too unambitious. Too low-key. Not Big enough.

Six walkie-talkies out of 10