Regulars (with running total of appearances):
* Cally (32) is suffering from ennui as the episode begins, and has been hiding in her bedroom. Well, I suppose her entire planet was wiped out two episodes ago: she’s bound to be a bit maudlin. When an alien ship drifts close to the Liberator, she clearly senses something telepathically but denies this when her colleagues call her on it. Cally then teleports over to the craft with Vila and Avon – they find it long-abandoned and containing a desiccated corpse. It’s not a ship; it’s a tomb. They then trigger a booby device and have to scarper pronto – but something goes wrong with the teleport and only Cally gets home. Thankfully she thinks quickly, returns to the ship and saves her friends. Yay! Panic over, Cally then falls asleep but hears a strange voice in her dreams…
* Avon (34) shows sympathy to grieving Cally (he was too busy on a revenge mission last week). After visiting the alien ship, he becomes interested in an artefact they recovered from it, which turns out to be a conduit that allows a spectre of some kind to cross over from the alien craft to the Liberator – the ghost takes Cally’s form and starts messing about with the crew’s sanity. (He couldn’t have just left the bloody thing alone, could he?) Avon is the one who’s most able to stand up to the invader and distracts her long enough to steal her ring, which she’s using to focus her physic energy. She then fades away into nothingness.
* Vila (35) is one of the first to be affected by the spectre’s bizarre influence. When the lights go out on the Liberator flight deck, he experiences hallucinations and starts performing sleight-of-hand magic tricks. (There’s appreciative applause added to the soundtrack.) He then sees the interloper: a woman who looks like Cally wearing face paint because she’s played by Jan Chappell in face paint.
* Dayna (9) operates the teleport, realises something’s wrong when she feels static electricity on the flight deck, and is knocked unconscious by some kind of energy beam.
* At the start of the episode, Tarrant (9) has identified an asteroid full of profitable minerals, but argues for postponing that mission when the alien craft hoves into view. He’s distrustful of Cally when she acts oddly and openly questions her motives, then has a row with Avon – it’s real alpha-male stuff. Later, he confronts the strange entity on the flight desk and learns she needs Cally’s life force to escape her tomb.
* Zen (29) and Orac (19) get some basic exposition to impart.

Best bit: Avon and Tarrant’s argument is a testosterone-fuelled thing of wonder. Tarrant is hot-headed, frustrated and full of angry-young-man-ism, while Avon is withering and dryly sarcastic.

Worst bit: Not a huge amount of the episode impresses, but especially tiresome is the scene near the end where Dayna explains the plot to Vila. If you need such a scene, surely there’s something wrong with your storytelling?

Review: Jan Chappell plays an additional character for the second time in three episodes. After the wet fish Zelda in Children of Auron, now she camps it up as that hoary old sci-fi cliche: an arrogant, capricious god with nebulous powers who enjoys toying with lesser life forms. Sadly, as with a lot of genre stories that can be summed up as ‘weird shit happening’, the episode can’t build any tension or jeopardy. The characters rarely know what’s going on and neither do we viewers, so the stakes are vague and the peril uninteresting. At least Fiona Cumming – who also directed the previous episode, Rumours of Death – makes sure we get some style and fun. There’s a peculiar, dialogue-less opening scene scored by whimsical music, a bizarre song sung over photographs of the Liberator model, and filmed cutaways of the regular cast acting out metaphors… It might not be much good, but you can’t claim Sarcophagus is boring.

Four intelligent menials out of 10 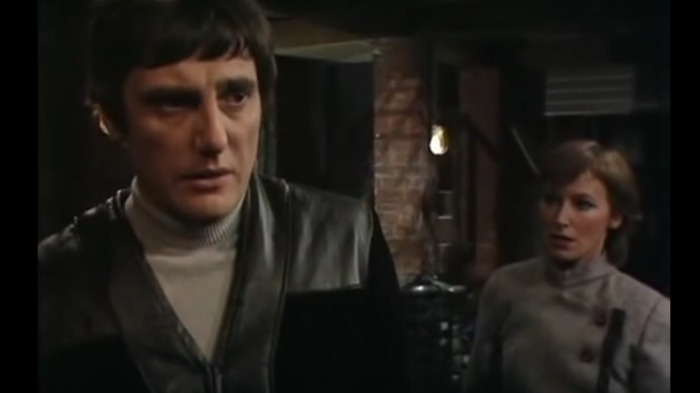 Regulars (with running total of appearances):
* Avon (33) is in a prison cell, looking tired and dishevelled, as the episode begins. He’s clearly been through several days of shit. A new interrogator called Shrinker shows up, and Avon says he’s been holding out until he arrives. Tarrant and Dayna then teleport into the cell and it becomes clear that Avon allowed himself to be captured so he could get close to Shrinker. Now they’ve identified the prick, Avon, Tarrant and Dayna take him back to the Liberator as their prisoner. After Avon has freshened up, he then teleports with the nervous Shrinker to a cave, where he intimdates him. You see, years before, the love of Avon’s life – Anna Grant – was captured by Federation forces, then tortured and killed by interrogator Shrinker. (We viewers, however, by now know different: Avon’s scenes are intercut with sequences showing Anna alive and well and leading a rebellion back on Earth.) After Shrinker admits that he didn’t kill Anna and says it was actually an agent called Bartholomew, who was planted near Avon to spy on him, Avon leaves Shrinker to die in the enclosed cave. His only clue now is that Bartholomew is somehow connected to one of Servalan’s advisors, so the Liberator sets course for Earth… At Servalan’s presidential palace, our heroes find a revolt underway and Servalan chained to a wall in the cellar. She says she’ll tell Avon everything if he releases her, but then Anna walks in. And the penny drops… Anna *is* Bartholomew. She was spying on Avon. She faked her death. When she reaches for a gun, Avon instinctively shoots and kills her. (By the way, isn’t Anna a wonderfully palindromic name for a two-faced character? I hope that was deliberate.)
* As mentioned, Tarrant (8) and Dayna (8) come to Avon’s aid in the prison cell: the signal that he’s ready to be rescued is his homing device being switched off. When the trio return to the Liberator, Vila (34) thoughtfully gives Avon a drink – a nice, understated gesture. Cally (31), however, objects to how roughly the others are treating Shrinker. Later, his four colleagues insist on helping Avon sneak into Servalan’s mansion.
* Servalan (18) is hosting a bigwig conference at her presidential palace, which has been expensively recreated to appear like a pre-atomic country house. But then a small group of rebels outfox her lacklustre security forces and storm the grounds…
* Orac (18) does the research on where Servalan is when Avon needs to find her.

Best bit: The masterful performance from Paul Darrow as Avon. Since he first appeared in the show’s second episode, Avon has consistently been the most interesting, most entertaining, most watchable character – and a large reason for that is Darrow’s commitment to the role. He rattles off his film-noir dialogue with a Clint Eastwood intensity and scowl, yet you always feel there’s a complex, emotional man underneath the bravado. The revelation scene in this episode sees him almost broken; you can see the faith fade away from his eyes. Even Servalan looks on sympathetically.

Worst bit: Sadly, one element really doesn’t work. There are multiple scenes featuring two security guards at Servalan’s mansion. The characters are played by decent actors, David Haig and Donald Douglas, but the whole subplot is not only filler but often quite cheesy.

Review: This intense, nasty episode has some wonderful dialogue and an achingly effectively plot for Avon. It starts ‘in medias res’ (in the middle of the action) and never lets up, while there’s craft and class throughout the script and the staging. Whether it’s Paul Darrow’s leading-man performance; or one of Jacqueline Pearce’s best turns as Servalan; or the significant recurrence of cells, caves and cellars; or the fun production design that combines the architecture of an ancient house (doors, fireplaces, even skirting boards) with sci-fi trappings (monitors, computers, Servalan’s strange desk); or the POV flashbacks; or the interesting blocking; or the expressive studio lighting; or the sucker-punch ending… So much impresses, so much goes towards telling an amazing story. The best episode so far.

Ten tasteless megalomaniacs out of 10