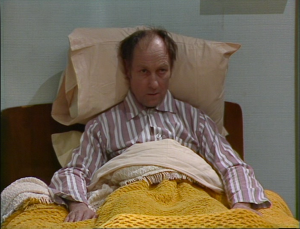 When a guest dies during the night, Basil fears they’ve poisoned him…

* Basil doesn’t want to deal with dog-obsessed guest Mrs Chase, yet is happy to pander to the more respectable Dr Price. When another guest, Mr Leeman, asks for breakfast in bed, Basil can’t help being sarcastic: “Is it your legs? I mean, most of our guests manage to struggle down in the morning.” The next day, when he takes Mr Leeman his kippers, Basil doesn’t spot that the man is dead and simply witters on about car strikes. Then Polly visits the room too and returns with the news that Mr L has passed on; he’s no more; he has ceased to be; he’s expired and gone to meet his maker; he’s a stiff; bereft of life, he rests in peace; he’s pushing up the daisies; his metabolic processes are now history; he’s off the twig; he’s kicked the bucket; he’s shuffled off his mortal coil, run down the curtain and joined the bleedin’ choir invisible. He is an ex-guest. Basil immediately assumes he was killed by the kippers – which should have been eaten by the 6th. So he hides the fish, even though the man’s clearly been dead for hours. After a doctor’s had a look, Basil decides to move the body. It proves tricky to do it discreetly with so many people about: Miss Tibbs sees the corpse (twice) and faints (twice), so Basil stuffs it in a laundry basket. But then Mr Leeman’s friends arrive to collect him for a meeting and Basil assumes they’re undertakers…

* Manuel has to deal with Mrs Chase’s numerous fussy demands about her dog. It bites both him and Polly, so they decide to put Tabasco sauce and pepper on its food. Manuel is then roped into helping Basil move the corpse – from room to room to office to kitchen to basket to lobby to room to room and eventually back to the lobby, where an exhausted Manuel goes on strike.

* Sybil is concerned when Mr Leeman doesn’t look well. The following day, she’s busy preparing for the laundrymen arriving. After Mr L is found dead, Sybil writes out his bill and puts it in his wallet: “They’re bound to look there. Better not charge him for breakfast.”

* Polly serves guest Dr Price at breakfast, and colludes with Manuel to play a prank on Mrs Chase. She then takes some milk up to Mr Leeman’s room and finds him dead.

* Terry’s doing the breakfasts. He’s not worried about using some kippers that are past their sell-by date.

* Mrs Chase (Mavis Pugh) is a guest who’s paid extra to have her small dog stay at the hotel with her – it’s allowed to sit in the bar and eat in the dining room. After the dog falls ill, she’s so preoccupied that she doesn’t spot a corpse in plain sight.

* The Major has a drink with Mrs Chase. When he sees the body the next day, he doesn’t immediately realise the guy is dead, then assumes he must have been shot.

* Dr Price (Geoffrey Palmer) is staying at the hotel and is a big fan of sausages. He’d like some for a late-night snack, but Sybil tells him chef would have locked them away. So the next morning, he orders just sausages for breakfast. Sadly, they get covered in sugar, then forgotten about, then burnt – so he simply cooks his own. Sybil asks him to help when Mr Leeman is found dead; Price says he’ll call the coroner.

* A short, middle-aged, balding man is staying at the hotel with a tall, younger, well-built redhead. Sybil’s guessed why. (He stays with a different woman each time.)

* Mr Leeman (Derek Royle) doesn’t feel well when his colleagues drop him off at Fawlty Towers, so he goes straight to bed but conks out before morning. He stays in room eight, which was called room 22 when Mrs Richards had it three episodes ago.

* Miss Gatsby narrowly misses overhearing Polly calling for an undertaker. Her friend Miss Tibbs is not so lucky: she sees the corpse itself and goes into a screaming panic. Polly has to slap her, which knocks Miss T unconscious. So Basil and Pol hide her in a wardrobe. When awake, she sees the body again and faints all of her own accord.

* Mr and Mrs White (Richard Davies and Elizabeth Benson – the latter played a different guest in Gourmet Night) are a Welsh couple whose room is used by Basil to hide the corpse and an unconscious Miss Tibbs. However, the Whites return and want to get into their room…

* Mr Ingrams (Charles McKeown) checks in during the cadaver-moving chaos. Later Basil and Manuel walk into his room, thinking it’ll be empty. In fact, they find Ingram blowing up a sex doll.

A SELECTION OF THE BEST GAGS:

* Basil suggests it would be safer if the delicate dog were kept inside an airtight container. The Major points out it wouldn’t be able to breathe. “It could try, Major. It could try.”

* Basil is affronted when Mr Leeman doesn’t say good night. “He’s not feeling very well,” explains Sybil. Basil: “Only had to say good night, dear. It’s not the Gettysburg Address, is it?”

* Sybil asks Mr Leeman numerous questions about his breakfast order. Basil follows them up with a facetious: “Rosewood, mahogany, teak? What would you like your breakfast tray made out of?”

* Manuel’s misunderstanding with Mrs Chase. “Don’t you have dogs in Calcutta?” she snaps.

* Basil’s rapturous happiness when he realises they *didn’t* poison Mr Leeman. Dr Price walks in while Basil is literally jumping for joy.

* Dr Price thinks it’s odd that Basil didn’t realise the man was dead. “I’m just delivering a tray, right?” says a defensive Basil. “If the guest isn’t singing, ‘Oh, what a beautiful morning,’ I don’t immediately think, ‘There’s another one snuffed it in the night. Another name in the Fawlty Towers Book of Remembrance.’ I mean, this is a hotel, not a Burma railway. It does actually say ‘Hotel’ outside. Perhaps I should be more specific. ‘Hotel for people who have a better than 50-per-cent chance of making it through the night.’” Sybil then sidles over and points out he has a kipper sticking out of his jumper.

* Basil at the bedroom door, making up a story about why the Whites can’t come in. We hear Manuel clearly dropping one of the bodies he’s trying to hide. “Pick that ashtray up, will you, Manuel?” says Basil. “The big one.”

* The notion, voiced by Mr White, that there’s a hotel “up by the prophylactic emporium.”

* When Miss Tibbs faints after seeing the corpse again, Sybil asks why Basil left it in the office. “Well, he wouldn’t fit in the safe and all the drawers were full.”

* Dr Price vs Manuel. “Look, I’m a doctor. I’m a doctor and I want my sausages.” To resolve the disagreement, Basil pokes Manuel in the eye.

* My single favourite moment in all of Fawlty Towers comes when Leeman’s colleagues arrive to collect him for a meeting. Basil assumes they’re the undertakers, so tells them Leeman is in the laundry basket. When it becomes clear who they really are, Basil struggles to talk his way out of the misunderstanding. “Oh, Mr Leeman…” he says, grasping for an explanation. Then Polly comes to the rescue: “We thought you said… ‘the linen’.” Basil is so impressed with her quick thinking that he snaps his fingers, points at her and says, “Brilliant!”

Outside? A moment on the doorstep as the Whites witness Basil and Manuel carrying the corpse and, distracted, crash their car. We also see Basil, Manuel and Polly flagging down a laundry van; then later Basil being loaded into the back of it in a basket.

Dated: The kippers should have been eaten by the 6th!

Henry Kissinger: None. No one. Not one mention of genuine famous person. There isn’t room in this script.

Ten British Leyland concertos out of 10