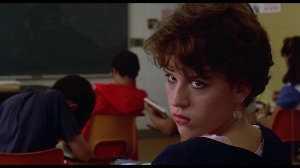 When Samantha Baker turns 16, her family forget her birthday because they’re distracted by her sister’s upcoming wedding. Meanwhile, Sam’s also trying to get noticed by the school hunk *and* avoid the attentions of an über-geek…

* Samantha Baker is played by John Hughes’s muse, Molly Ringwald. She’s a smart, likeable but shy teenager with red hair and a frustrating life. The first 67 minutes of the film take place on the character’s 16th birthday, but her entire family (including all four grandparents) have forgotten. She fancies a fellow pupil called Jake Ryan, but doesn’t think he’d be interested because he’s popular and has an attractive girlfriend. After making friends with a geek at a school dance, she freezes when she gets the chance to talk to Jake. So she goes home unhappy, where – in a very sweet scene – her father apologies for forgetting her birthday. Things also look up the next day: after Sam is bridesmaid at her sister’s chaotic wedding, Jake arrives to woo her… The initial favourite to play Sam was Ally Sheedy, but then John Hughes discovered Ringwald. The actress was only 16 herself, but had real star quality around this time. She’s so watchable.

* Sam has three siblings. Self-obsessed older sister Ginny (Blanche Baker) is preparing for her wedding but has been struck by her period. She takes four painkillers, which just make her delirious. Younger brother Mike (Justin Henry) is a chipper smartarse, while there’s also a young sister, Sara (Cinnamon Idles), who doesn’t get much to do.

* Sam’s best pal, Randy (Liane Curtis), is in some early scenes then kinda drops out of the story.

* Jake Ryan (Michael Schoeffling) is the high-school hunk that Sam fancies. He’s a senior; she’s a sophomore – though oddly they share a class at one point (is that an American thing?). Unknown to Sam, he actually likes her too and is bored by his shallow girlfriend, Caroline. So he decides to pursue Sam and asks head geek Ted for help. Jake finally tracks Sam down at the wedding. He waits outside the church with his red sports car. Show-off. (Viggo Mortensen also auditioned for the part. Surely he’d have been better than the lethargic Schoeffling.)

* Caroline Mulford (Haviland Morris) is introduced via a close-up of her pert breasts while Sam and Randy look on with envy in the showers. She’s so perfect – popular, gorgeous, dotes on her deaf brother – that Sam hates her. Caroline later gets plastered at the big party and traps her hair in a door, so a helpful friend (played by Jami Gertz) cuts a chunk of her ’do off. She’s then taken home by an overexcited Ted. When they wake up in a car the following morning, Caroline thinks they may have slept together (neither can fully remember) and has a weird feeling that she enjoyed it.

* The Geek – as he’s credited, though he calls himself Farmer Ted – is played by Anthony Michael Hall, the Robert De Niro to John Hughes’s Martin Scorsese. We first see him inelegantly hitting on Samantha, who couldn’t be less interested. He then tries again at that evening’s school dance: Sam is initially disgusted by his attention, but after he admits that he’s never ‘bagged a babe’ and that he’s pally with Jake, she starts to tolerate him. She even gives him her underwear so he can claim he slept with her. (He charges fellow nerds to see the pants.) Ted later blags his way into Jake’s party, and gives Jake advice on how to seduce Sam. He’s then tasked with getting a paralytic Caroline home in Jake’s dad’s Rolls-Royce. A hopelessly drunk Caroline flirts with him (“This is getting good,” he says to camera after she passes out in his lap) and he gets his pals to take a photograph of them together. The next day, they share a kiss. A prom queen and a geek? There may be some wish-fulfilment going on here. In many ways, Hall is the star of the movie. By playing the character with commitment and belief, rather than as a cartoon dweeb, he makes him likeable and interesting.

* Geek Girl #1 (Joan Cusack) is a nervous schoolgirl who wears a restrictive neck brace. At one point she has trouble using a water fountain; later, drinking from a can is a big problem.

* Long Duc Dong (Gedde Watanabe) is a Chinese exchange student who’s staying with the Baker grandparents, so they bring him to the wedding. Mentions of his name are accompanied by a gong-crash sound effect – this is just one example of the racist humour that clings to the character. Sam is forced to take Dong to the school dance, where he meets and becomes besotted with a large-chested woman (Deborah Pollack). The two of them spend the evening together, get drunk and attend the party at Jake’s house. The next day, Dong’s found lying in the street. He’s still drunk and has lost grandad Fred’s car, which he – Dong – finds hilarious.

* Ted has two nerdy sidekicks – Bryce (John Cusack) and Cliff (Darren Harris). They enjoy using surveillance goggles and radio communicators (even when standing next to each other), and betting with floppy discs.

* Ginny’s fiancé, Rudy (John Kapelos), is an Italian-American dunderhead. After they’ve married, she’s so loopy on painkillers that he has to manhandle her through the congregation and into the car.

* Sam’s parents – Jim (Paul Dooley) and Brenda (Carlin Glynn) – are likeable, and are gutted when they realise they forget her birthday.

* Both sets of Sam’s grandparents are staying for the wedding. One pair (Edward Andrews and Police Academy’s Billie Bird) moan about their health then think Jake is making a dirty phone call when he tries ringing for Sam. The others (Max Showater and Carole Cook) are more earthy and embarrass Sam by pointing out that she’s ‘got her boobies’.

* Ginny’s parents-in-law-to-be are Italian-Americans. The very subtle joke is that they might be gangsters. A section of music from The Godfather scores the scene, just in case you miss the satire.

* There’s a short, squeaky-voiced woman working at the church. We hear the sound of clinking bottles in her handbag as she walks.

Close-ups: With his director’s hat on, John Hughes was a great fan of montages of close-ups. It’s a cute way of telling story – or selling gags – through details. This film’s showpiece example is the title sequence, in which Sam’s school is introduced and explored through a series of shots of students’ faces, legs, hands and bums, lockers, jackets, bus doors… Here it is, though this clip has the wrong music:

Music: God, John Hughes knew how to use music. This film is *full* of it. As well as Ira Newborn’s incidental score, snatches of old film and TV themes are used for comic effect. The Twilight Zone, Peter Gunn and Dragnet are all deployed with real wit. There are also loads of great pre-existing songs to create atmosphere and mood – Paul Young’s Love of the Common People, Altered Images’ Happy Birthday, Spandau Ballet’s True, the Specials’ Little Bitch, Hang up the Phone by Annie Golden, Frank Sinatra’s Theme From New York, New York and many more.

Review: “I can’t believe it. They fucking forgot my birthday.” This fun film has a slightly odd structure. As the title suggests, it starts and ends as birthday girl Samantha’s story. However, she doesn’t feature very much in the middle and the focus shifts to Farmer Ted. It’s like the movie has been distracted by a more overtly funny subplot. But there’s plenty to enjoy, not least the relentless 1980s-ness of the music, the fashions, the notion that all 16-year-olds can drive, Sam’s bedroom posters (Culture Club, Squeeze, et al), the kind of high-school dance that Grosse Point Blank would later reference, and wild parties held in enormous houses of parents who are away for the weekend… It can be a bit crude at times – lines about race and rape have dated badly – while the ending is incredibly pat. Everyone gets a happy ending whether it’s believable or not and the climactic wedding never really takes flight. But it’s mostly entertaining stuff, full of comic moments and plenty of heart.

Eight muscle relaxants out of 10